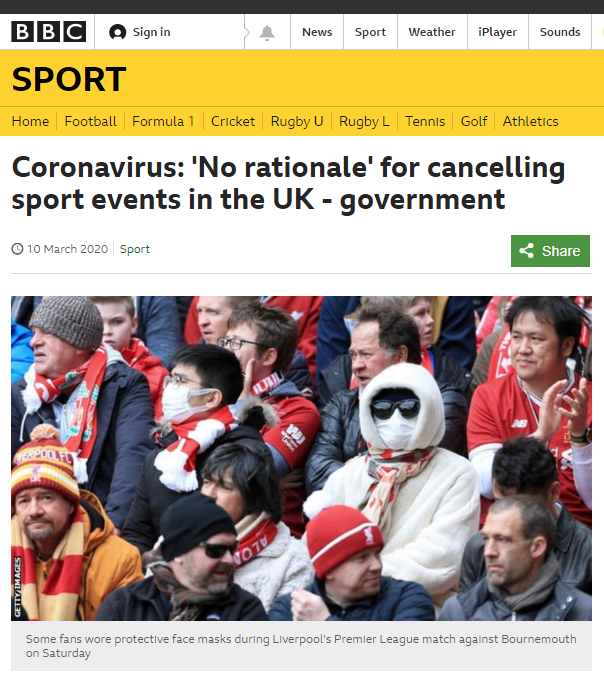 You join us on another splendid Anfield evening, ringing to the sound of You’ll Never Walk Alone and anticipating the return of Jordan Henderson to first team football. Tomorrow the World Health Organisation, in response to 20,000 cases and over 1,000 deaths, will declare a pandemic in Europe but tonight it’s the visitors Atletico Madrid who get us underway.

Costa drags an early shot wide but then it’s all Liverpool, pressing high up the pitch and looking aggressive and sharp as Oxlade-Chamberlain forces a fine save from Oblak, in goal for Atletico. We’re joined tonight by 3,000 visiting fans from Madrid even though gatherings of over a thousand have already been banned in Spain. Here in the UK, it’s government’s view that shutting down major sporting events will only have a minimal effect.

Oblak again! The Slovenian keeper is really earning his money tonight, somehow getting his hand to the ball after Firmino touched on a wicked Alexander-Arnold cross. Nearly half the coronavirus cases in Spain are currently in Madrid but the fans here clearly haven’t been let down by their team’s defence.

Finally, Liverpool turn all that pressure into a goal. Another peach of a cross from Oxlade-Chamberlain headed home by Wijnaldum from 12 yards out. That puts the fixture all-square with Liverpool one down after the first leg. There are only twelve confirmed coronavirus cases in Merseyside tonight and it’s all to play for.

We’re back underway. No changes in the break other than weather as the rain is now bucketing down. The day after tomorrow, the Premiership will suspend all fixtures, followed by the EFL a few days later.

It’s still all about the Atletico keeper: a fine save from a Mane volley that was ruled offside anyway and then another as Oxlade-Chamberlain fizzes in an effort of his own. Oblak really is on fire, and he needs to be. In just under a week EUFA will postpone Euro 2020 for a year.

Twenty-five minutes to go here and despite their best efforts Liverpool can’t seem to score. Llorente has replaced Costa for Atletico, but is it time for some fresh legs from the Liverpool bench? It looks like they’ve lost momentum in the last five minutes. It’s close, not like Atalanta v. Valencia three weeks ago which the mayor of Bergamo described as “a biological bomb”.

He’s hit the bar! A deflection from a Salah shot looped up into the box but Robertson’s subsequent header smashed off the woodwork. What have Liverpool got to do to make an impact? It’s like Matt Hancock said earlier today: “Sometimes the things that we, as lay people, may feel intuitively will have the biggest impact do not in fact have the biggest impact. There are some things that feel right but do not have an impact at all.” Just like Liverpool’s attack.

Full time: Liverpool 1-0 Atletico Madrid, and we’re headed for extra-time, ironically the one thing The Global Health Institute told us we didn’t have.

Here we go again, and this could yet go to penalties. But wait! A goal! Firmino’s header hits the post but he’s able to tap the rebound home. Liverpool are on the up and despite the Premiership taking matters into their own hands, Sir Patrick Vallance will tell the daily press briefing that banning mass gatherings is not a priority.

Oh no! That’s a terrible error from the Liverpool keeper as his routine clearance goes straight to Felix who lays it off for Llorente to slot home. The visitors will go through on the away goal rule as it stands, but it’s still another five days until the government will advise against large-scale events.

Another sucker punch. Llorente slots home his second and that really could be it for Liverpool as we approach half time in extra time. It’s going to take a huge 15 minutes from the holders now. You’ve got to wonder if this match should have gone ahead at all.

It’s all too late for the champions, sadly, they’ve clearly run out of steam as Morata runs half the length of the pitch to slot home past Adrian to put the icing on the cake for the visitors. It’ll turn out to be the last big football match to be played in England for some time.

Full time: Liverpool 2-3 Atletico Madrid, and by 15th April nearly 3,000 people in Merseyside will have tested positive for COVID-19 and 448 of them will have died, including Liverpool superfan Nick Burrows and Hillsborough survivor Dave Roland.