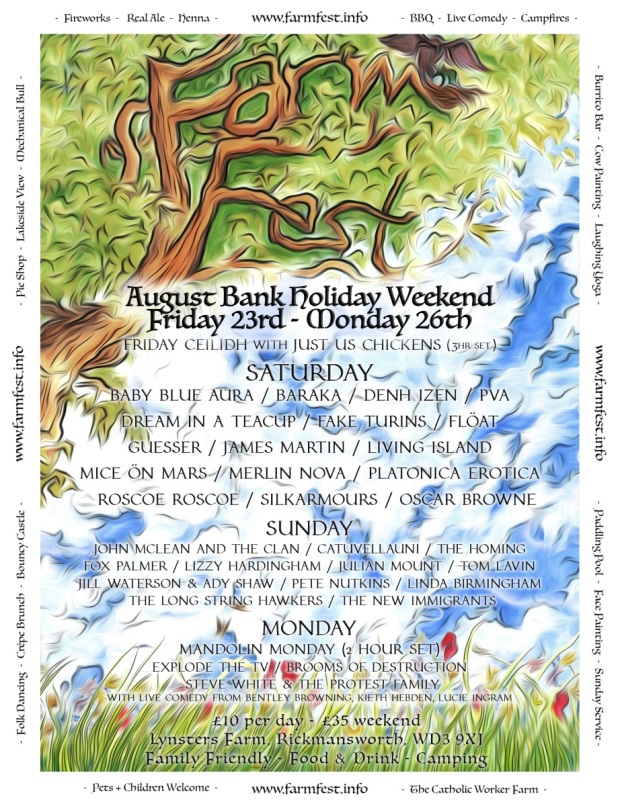 “The Catholic Worker Farm and Mary House provide accommodation, food, English lessons, counselling and other services for 19 destitute (without access to public funds) female asylum seekers… and their children, at no charge.”

Three generations ago, my ancestors were what would now be called refugees or asylum seekers, fleeing oppression and murder.  We now live in a time of unprecedented numbers of people doing the same thing.  Women refugees – about a third of the total in the UK – suffer particular problems and are more likely to become victims of violence, including sexual violence.  Women refugees with children are at serious risk of having their children taken into care.

The Catholic Worker Farm have to fund their essential work supporting women.  One way they do this is by holding events such as FarmFest – a four day festival across the late August Bank Holiday weekend.  We’re proud to be playing this year – on Monday 26th August, time to be confirmed.

It’s cheap as chips to get in: £35 for the whole weekend for adults, half-price for kids, free for 0-5 year olds.  That includes 33 musical acts plus comedy, FREE camping and FREE parking, if you need it.  If you’re not doing the whole weekend, you can pay £10 per day.  And yes, there’s real ale.

It’s all happening on a farm in Rickmansworth, inside the M25.  See you there?

We first met Maddy Carty about two years ago.  We were both playing for the Show Culture Some Love campaign.  The Family were struck by her remarkable, strong yet vulnerable voice and sophisticated modern soul-based songs.  We immediately suggested her to play at the Matchwomen’s Festival a few months later.

During a rehearsal (yes, we do rehearse), we were trying Right To Strike (from Drums Ruin Everything).  It didn’t sound quite right.  Someone suggested that it might sound good with a female voice doing harmony, like… Maddy Carty.  We warmed to the idea that she might play keyboards on it too.  A few days later, she agreed.  More than that, she really wanted to perform Have I Got News For You with us.  By the time we met up, she was playing on four songs.  She joined us on stage at the Matchwomen’s Festival in July – and it was fun.  We did it again at the Leytonstone Festival the following week. A couple of months later, Steve and Maddy did a couple of songs together in central London.

Meanwhile, a new movement had been brewing.  It was We Shall Overcome: hundreds of gigs across the country on the same weekend, protesting against austerity, and raising money and collecting food for those hardest hit by it.  We wanted to do something special for that – but what?  Well, who else would we call?  So in October, Maddy Protest joined us for our entire set at the Rose & Crown for Walthamstow Folk’s contribution to the weekend.  It was a great night with an enthusiastic crowd, but…

Discussing it afterwards, we felt that something was a bit off.  Was it Doug’s socks?  No, not this time.  It boiled down to this: we had used Maddy as a piano player and a backing vocalist.  Now, don’t get me wrong.  She’s fine as a piano player.  She’s fine as a backing vocalist.  But she’s got so much more.  She was easily the best singer present on stage that night (sorry, Doug), but her terrific voice was always in the background.  Also, she’s a very strong songwriter, but we played none of her songs at all.  She was happy to play that night, but on reflection it seemed to us to be a bit of an insult to her talents.

Fast forward to 2016.  We had a better idea: how about having Maddy join us properly for a one-off gig?  This time, she could back us on some of our songs – and we would back her on some of hers.  But she let us down badly, pointing out that she was getting married on the day that we’d planned for the performance. How selfish can you get?

Now it’s 2017 (check your phone if you don’t believe me) and we’ve forgiven her for that snub.  It’s finally going to happen.  On Sunday 16th July at the Tolpuddle Martyrs’ Festival in Dorset, Maddy Carty & The Protest Family will take to the stage.  It’s going to be different.  Come and join us.