“Glossop Labour Club is an independent social club. It is not affiliated to any political party, but is home to people who share a progressive outlook on life.”

Ooh, that’s interesting: setting out your “No, we’re not affiliated to the Labour Party” stance in the opening paragraph of your web site. The authors of Glossop Labour Club’s site go on to add that they’re one of the oldest Labour/Socialist clubs in the country, founded in 1906 by the ILP, two years before the national party existed.

Our kind of folk, but folk we’d mostly not met before; and though a warm and friendly audience, one that was prepared to subject our songs to some scrutiny. From the stage you could almost feel people listening, working out what we meant and realising that yeah, we are all on the same side. It’s great when that happens. I remember a conversation at Tolpuddle the morning after we’d played when a fella we’d not met before (let’s call him Hugh) came back to us with a couple of lines from the first verse of No Pasaran In E17 for a fuller version of the story.*

Talking of anonymous contributors to the story, I used a fictional friend (let’s call him Dave) as part of the intro to Victoria Says. Fictional Dave is of course based on a real friend called, um, Dave, but being 200 miles away from home I thought I’d got away with it. Turns out that Dave (the real one) had a mate in the room who he’d encouraged to come along if we were ever playing nearby. Busted. But in a good way.

Anyway, an hour long set gave us a good opportunity to set out our stall to a new crowd. We started with a bang, messed around with spoons and poetry in the middle, and finished on a high with a Pete Seeger singalong and our version of the National Anthem. We got a lovely review in the Morning Star too.

With a bit of TLC, the Protest Family tour bus made it to and from Glossop without incident and we’ll hope for the same again as we head to Barnsley on May Day for the Festival of Solidarity in the Polish Club. That’s one you don’t want to miss, a gathering of the great and the good of the lefty touring scene, with an average age slightly lower than the Pensioners Against The Cuts Tour. 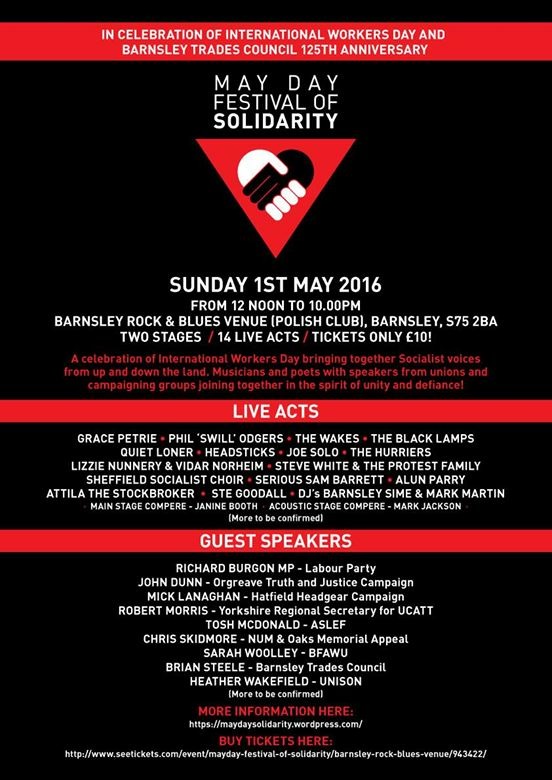 * Hugh: “So what you’re saying is that the RMT used health and safety to perform an overtly political act and oppose fascism?” Us: “Yeah”.