Our Steve turns 50 (fifty) this week.  It’s a difficult age.  It’s a time when you really, really have to accept that you’re never going to play for England (or even Holland), never going to come up with a coherent Theory Of Everything, never going to the Moon.   (Some of us still haven’t got over that last one.)

He wasn’t always a songwriter.  He only started this nonsense in earnest about 10 years ago.  Since then, Steve’s written songs about all sorts: broken hearts, socialism, police violence, tax dodgers, clownish politicians, fast food, racism, Santa, merchant bankers, picket lines, UKIP, revolution, resistance, cancer, refugees, fox hunting, truth, gluten, death, swearing, cycling, a fizzy drinks company, the misappropriation of language, Hank Marvin, anarchy, monarchy, gentrification, Walthamstow, Chingford, Leyton, Orient, Leyton Orient, health & safety legislation,  piracy (arrrrrrhh!!) and even, rarely, about himself.  Yes, we know a song about that.  Sometimes you think that the songs are too simple to work.  But they usually do.

When I first saw Steve perform live, he was solo (or with Chris Da Lipz), handing out buttered chunks of home-made bread at gigs.  Me and Doug joined up with him in 2009 and what soon became The Family has been on an adventure ever since.  We’ve played in the east, west, south and north of the country and in Northern Ireland.  We’ve had Tony Benn and Jeremy Corbyn as support acts.  We’ve performed with an ex-Sex Pistol.  We’ve had talents as diverse as Louise Distras, Attila The Stockbroker and Maddy Carty playing on stage with us.  Yes, we’ve argued, fallen out, sulked and fallen back in again.  Most of that happened in one row about a count-in.

We’ll start recording our third studio album soon, and once again all of the songs will be written by Steve.  The rest of us chip in musical bits and pieces and even the occasional word, but they’re his songs.

So you’re all invited to come and join us in celebration on Saturday night at What’s Cookin’ in Leytonstone.  Watch the bands.  Raise a glass to our bandmate – our mate – Steve, who in his personal, professional and musical lives strives to make things a bit better for other people.  And most of all, sing his songs along with us.  See you there. 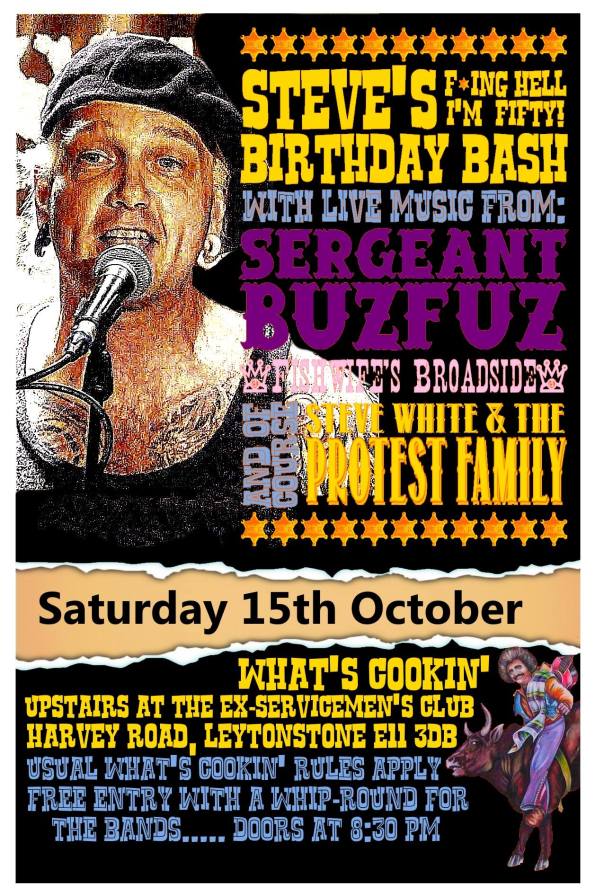